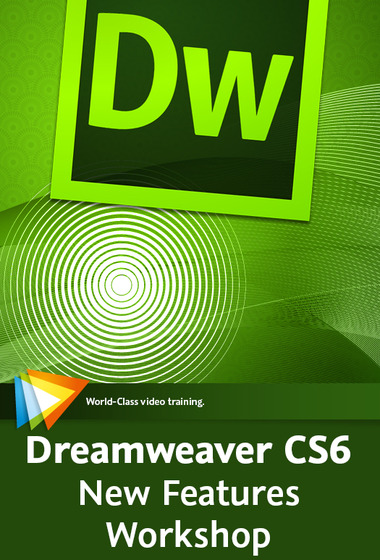 In this workshop you’ll learn all about the new and upgraded features in Adobe Dreamweaver CS6. The contents of this course include:

Introduction
In this chapter you’ll be introduced to the new features in Dreamweaver CS6, which are heavily weighted toward CSS improvements. You’ll also learn about changes to jQuery Mobile, PhoneGap, and FTP, as well as the new Mac Application frame.

Managing Web Fonts
Support for web fonts is drastically improved in Dreamweaver CS6, and in this chapter we’ll look at the key new features in this area, such as the Web Fonts Manager.

CSS Improvements
Many of the big improvements in Dreamweaver CS6 are related to CSS, and in this chapter you’ll learn all about them.

jQuery Mobile
This chapter looks at the jQuery Mobile framework integrated in Dreamweaver CS6, which creates a touch-optimized user interface for smartphones and tablets.

PhoneGap and PhoneGap Build
In this chapter we’ll look at PhoneGap, an open source framework that creates native apps for mobile devices using just HTML, CSS, and javascript. You’ll also learn about the PhoneGap Build Service panel, which uploads your files to an online service that generates the native app files for different mobile operating systems.

Other Changes
This chapter covers changes in Dreamweaver CS6 not discussed elsewhere in the course, including differences in the way Dreamweaver handles lists, Smart Objects, and the resizing of images.

The lessons are wrapped in a feature-rich interface that lets you jump to any topic and bookmark individual sections for later review. Full-Screen mode provides a hi-def, immersive experience, and Watch-and-Work mode shrinks the video into a small window so you can play the videos alongside your application. Also included are exercise files that give you an easy way to try out the techniques you learn.