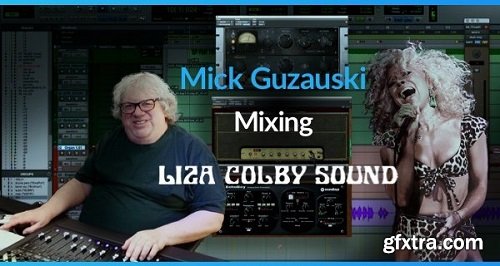 PUREMIX Mick Guzauski Mixing The Liza Colby Sound TUTORiAL-SYNTHiC4TE
SYNTHiC4TE | Sept 11 2020 | 1.5 GB
Grammy Award Winning Engineer, Mixer, and Producer, Mick Guzauski, has made a name for himself as one of the world's top mixing engineers. With over 27 #1 singles, few have risen to the heights of success that Mick has.

In this 2 hour tutorial, Mick opens up the multitrack session of the song "My World" from The Liza Colby Sound for the first time and mixes it live on camera from scratch explaining every step of his process along the way.

In this 2 hour tutorial, learn how Mick:

See how Mick Guzauski:
Prepares the snare for parallel compression
Re-amps a B3 Organ through a Marshall Plexi plugin
Uses his Avid S6 control to dial in the automation
Crafts exciting effects for the lead vocal
Cleans up distortion in the top end of the lead vocal
Processes the drum bus to have the clarity and excitement he is known for
Dials in a Fairchild 660 on the stereo bus
Uses two separate limiters to split the work between the drum bus and stereo bus
Adds width to the guitar solo with delays
Adds his personal touch to the mix by automating on his Avid S6
Watch Mick Guzauski, mix "My World" from The Liza Colby Sound. Only on pureMix.net