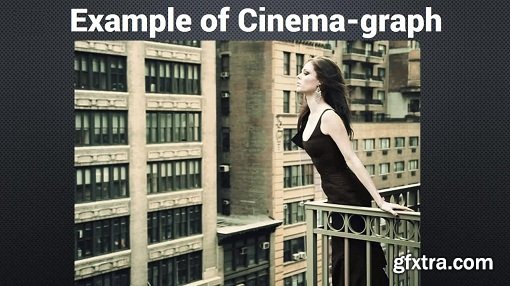 Creating Cinema-graph Using Adobe Photoshop
Duration: 1h 133m | Video: AVC (.mp4) 1280x720 30fps | Audio: AAC 48KHz 2ch | 206 MB
Genre: eLearning | Language: English
Cinema-graphs are still photographs in which a minor and repeated movement occurs, forming a Video Clip. They are published as an animated GIF or in other video format and can give the illusion that the viewer is watching an animation.

Cinema-graphs are made by taking a series of photographs or a video recording, and, using image Editing software, compositing the photographs or the video frames into a seamless loop of sequential frames. This is done in such a way that motion in part of the subject between exposures (for example, a person's dangling leg) is perceived as a repeating or continued motion, in contrast with the stillness of the rest of the image.