How To Draw Female Torsos: Learn Anatomy of The Female Torso, & Pose It In Perspective
Categories: Tutorials » Design 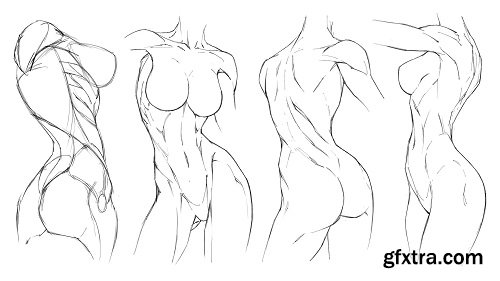 How To Draw Female Torsos: Learn Anatomy of The Female Torso, & Pose It In Perspective
https://www.skillshare.com/classes/How-To-Draw-Female-Torsos-Learn-Anatomy-of-The-Female-Torso-Pose-It-In-Perspective/1668262127
So you want to draw female torsos? - And you want to draw them well. You want the torsos of your lady characters to have great shape, accurate anatomy and elegant poses.

But that's not all.

You also want the ability to draw the centrepiece of the female body from any angle, in any position you want.

Welcome. You've joined the right class, because the lessons you're about to watch go in-depth on each of these important topics.

We'll begin by introducing you to the simplified base model I like to use for drawing female torsos. This easy-to-draw, foundational structure allows you to establish positioning, scale and proportions right off the bat, giving you the best chance of success when it comes to drawing the trunk of a woman's body.

Then we'll venture into anatomy. Here you'll learn about each of the primary muscle groups throughout the female torso, where they're placed and how they're drawn from multiple points of view.

Finely we'll draw a series of finished female torsos. I'll show you how to construct, and pose them dynamically - discussing the movement of the muscles as they follow the motion of the body. You'll also learn how to define and refine your female torso drawings for a polished presentation.

Here's the recap on everything you'll learn about in this class:

We'll cover each of these core topics with real-time, step-by-step demonstrations you can actively follow along with - so that by the end of this class you'll have drawn numerous female torsos in different poses and angles.

After you've watched these lessons you'll have all you need to confidently and competently draw the female torso dynamically - without limits.

Grab your sketchbook and pencil, or open up your favourite drawing application - and join me now as we master drawing the female torso.