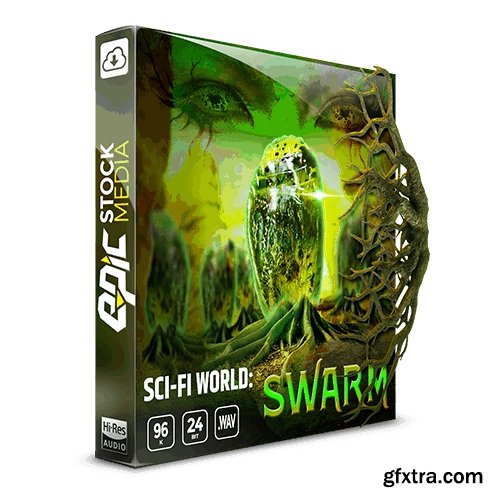 The latest installment in the Epic Stock Media Sci-fi World Sound Effects Series has landed on planet earth. Sci-fi World – Swarm presents a meticulously designed ambience loop library inspired by an insect-like alien race and their quest for dominance in the galaxy. Sci-fi World – Swarm is a collection of over 2 hours of interior and exterior sci-fi background loops. As a result, you’ll have the ability to orchestrate amazing background sounds for your entire sci-fi or other-worldly sound production with ease.


When you need to set the tone for an alien race that is hell bent on exacting revenge on the galaxy, one planet at a time, Sci-fi World – Swarm is your answer. It’s a truly unique sound collection geared towards multiplayer space, fantasy, RPG, MMO, and sci-fi games. Swarm showcases sounds described as; creepy tunnels, enemy planets, hatcheries, engine rooms, planetary winds, surrounded by bugs, dungeon hive, and millipede lair.

Cut from the mold of games like StarCraft II, Sci-fi World – Swarm presents an amazing selection of background sounds that are frankly… out of this world. On Sale Now!