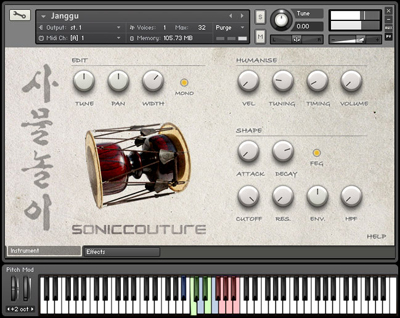 Soniccouture Samulnori Percussion MULTiFORMAT SCD DVDR-SONiTUS | 1.01GB
Samulnori is a type of Korean percussion music that has been gaining popularity over the last few decades, both in Korea and abroad. The term “samulnori” ( ) can be broken into two parts - “samul” meaning “four things”, and “nori” meaning “to play”.

The Samulnori ensemble generally consists of four main instruments : Puk, Janngu, Jing and K'Kwaenggwari. In a minimal ensemble there will be just one of each, but you will also sometimes see larger groups with four or more of each instrument. However, even in these larger groups, the role of each instrument is the same. Each one represents an element of nature, the Jing being the wind, the Janggu the rain, the Puk the clouds, and the K’kwaenggwari the lightning.

Samulnori has it’s roots in farmer’s music (nong-ak), and includes not only music but dancing to celebrate harvest times. The music also stems from the shamanistic tradition of utdari pungmul, which is performed on these same instruments together with singing and wind instruments. In it’s modern incarnation, samulnori relies solely on the four instruments below, either in quartet or larger ensemble.