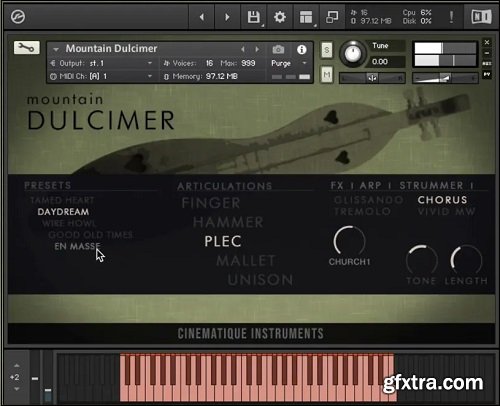 Cinematique Instruments Mountain Dulcimer KONTAKT-GbR
GbR | 02 July 2022 | 1,2 GB
BRIGHT DRONE AND DELICATE STRUMMING
The Mountain Dulcimer is a high-quality three-string wooden stringed instrument which produces a soft and melodic drone, also known as a bourdon tone. It is well known for its use in compositions by Thomas Newman, such as American Beauty.


We focused on capturing the Mountain Dulcimer in a variety of articulations. One can play the mountain dulcimer with fingers - but we have also played it with a Piano Hammer, Plec and Mallets. Besides five presets, the new Stringed 2022 GI impressively keeps many options available. But in no way should we forget to mention the soft shimmering strumming.

WHAT IS A MOUNTAIN DULCIMER?
Although the mountain dulcimer has its origins in the Appalachian region in North America, it was at the hands of German, English, Irish and Scottish immigrants that the instrument came to life. The instrument presents characteristics of many European stringed instruments, especially the German Scheitholt, considered the Mountain Dulcimer's primary ancestor.

Built out of wood and traditionally shaped like an hourglass, the mountain dulcimer uses metal wire strings to produce a bright sound that lends itself to delicate strumming. Known for its drone, or bourdon, effect, the mountain dulcimer is considered an authentic piece of musical Americana. Nevertheless, it was also modernized and used in different music genres. Perhaps its better-known example of contemporary usage is in the music that Thomas Newman composed for the film American Beauty.


THIS IS WHAT YOU GET
Organic Sound
We mainly focused on capturing the notes in a very realistic and organic way. All main articulations were recorded with a cool condenser in four times round robins and 2-3 velocity layers.

Glissando
The given glissando mode is unique and perfectly fits the sound of a Mountain Dulcimer.

Tremolo
Once activated, you can easily play true tremolo triggered by the mod-wheel.

Strumming Engine
A very realistic strumming engine that perfectly simulates the velvety and shimmering strumming of the Mountain Dulcimer. It is a unique feature with a Strumming Speed Slider that mimics the speed of the hand and drone option.

Many Articulations
We recorded many different and unique articulations to give you a vast spectrum of sound possibilities. Each of them is useful for a different kind of musical style:
- Finger: Played just with finger
- Hammer: Played with a Piano Hammer
- Plec: Played the dulcimer with a guitar plec. Hard Sound.
- Mallet: Played it with a soft mallet.
- Unison: Simultaneously playing the strings tuned to the same tone.

Eight Reverb Types
Besides several different sizes, you get special types such as "Infinite" and "Ghost".