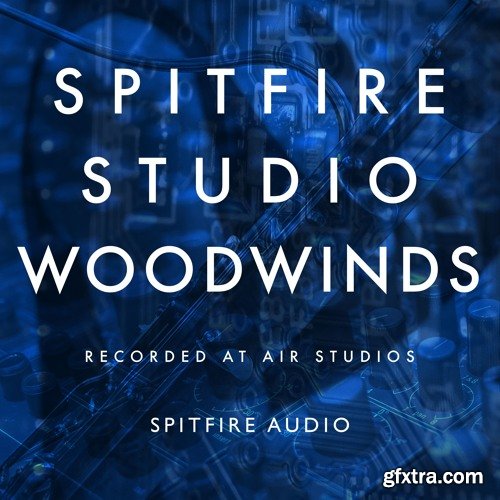 Spitfire Audio Spitfire Studio Woodwinds KONTAKT
KONTAKT | 9.50GB
SPITFIRE STUDIO WOODWINDS - YOUR CREATIVITY, YOUR CONTROL
Spitfire Studio Woodwinds is the third and final release in our vital Spitfire Studio Orchestra range. Our ambition was to create an incredibly versatile pro-end dry stage sample library, and by choosing the crisp and vibrant setting of AIR Studio One - a smaller, more controllable space than the opulent Lyndhurst Hall - we offer our fellow composers a woodwind library that captures every grain in depth and detail.


As with our other Studio libraries, we offer you a wide range of instruments from the section - from the guttural depths of the bassoon to the gleaming sounds of the piccolo. With solo or section performances, choose from an abundant range of articulations, and realise the detail of your music with rips, key noise FX, swells, and sforzandi. Boasting the widest emotional range of performance in pin-sharp detail, Spitfire Studio Woodwinds will breathe new life in to your orchestra.

Two years in the making, Studio Woodwinds is the third section of our new Studio orchestral libraries. It has all the treasured Spitfire hallmarks: A-list London session players, the best instruments and an unparalleled signal path recorded to tape by Grammy award-winning engineer Simon Rhodes - in a room perfectly suited to capturing the granular detail and velvet sonority of the woodwind family. As with our existing symphonic and chamber ranges, we have applied a "no stone unturned" approach: an encyclopaedia of articulations, dynamic layers and round-robins for seamless, nuanced realism.

Spitfire Studio Woodwinds takes you straight to the section's roots for instant results: 143 articulations across 11 instruments, including 7 solo - all recorded to a Decca tree rig featuring Schoeps microphones. This peerless detail and control extends to the articulations, which fulfil all the traditional requirements, but include extended techniques such as Multitongue, Air and Key FX, staccatissimo and swells. Instantly usable, and immediately musical, whatever stage you are at.

Spitfire users now have a comprehensive range of orchestral manoeuvres. We believe Studio Woodwinds suits users of our existing Lyndhurst Hall ranges as an essential sonic alternative, suitable for the widest range of musical settings and ready for your own favourite reverbs and FX. With the versatility we have engineered into this library, we have no doubt that Spitfire Studio Woodwinds will be a cherished part of your music-making over the next decade.

Recorded by Simon Rhodes
Simon Rhodes was an obvious choice for our entirely new Studio Orchestra range - a microphone magician with multiple Grammy awards to his name, and a senior engineer at Abbey Road Studios. Simon has worked at the highest level in film score recording, having been James Horner's go-to engineer for 18 years. Blockbuster movies such as Avatar, Skyfall and Spectre have also had the Rhodes treatment.

"For the Spitfire Studio Woodwinds sessions, the approach echoes what we did with the Studio Strings and Brass, so there is complete consistency between the libraries. The main Schoeps mics were the same, and I captured two flavours of spots." For more mic positions and two curated mixes, check out the Professional edition of the library.