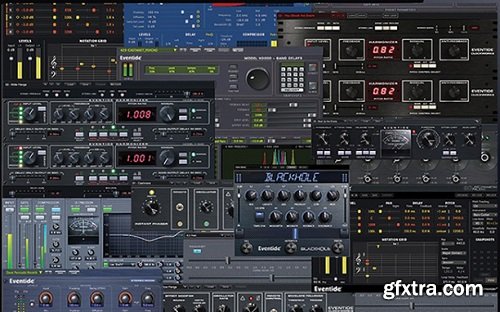 Many of the plug-ins that you need, the bread and butter ones, come bundled with your D.A.W. But to define your own sound, you’ll want more. The fundamental question is, how can you make your productions stand out from the crowd? Eventide Ensemble is the answer.


Eventide plug-ins give you the ability to make your recordings evoke the sonic landscape of classic albums AND to open the doors to the creation of new sounds never heard before. Our legacy plugins recreate the sounds that defined classic recordings by famed producers, engineers, and artists like Dave Pensado, George Massenburg, Tony Visconti, Steve Vai, Jimmy Page, Frank Zappa, Eddie Van Halen, and many more.

And, when we say that our our plug-ins are faithful recreations, we mean it. To truly experience the unique sound of classic gear, the plug-ins need to be painstakingly designed to faithfully emulate the nuances of the primitive analog and digital circuitry. When Eventide recreates a classic piece of gear, it is one of our own. These plug-ins are not emulations created by third parties.
Ensemble is not your normal plug-in bundle

Our legacy plug-ins recreate the sounds that defined hit records, but that’s just a starting point. Ensemble is packed with new, award-winning effects. Plug-ins like Blackhole, UltraReverb, Octavox and UltraChannel – unique tools not found anywhere else that open the doors to the creation of new sounds never heard before.

20 years ago, you would need a million-dollar studio, and tens of thousands of dollars worth of gear to get that unique sound. With the Eventide’s Ensemble plug-in subscription you get the award-winning effects heard on countless hit records now available in a plugin bundle that you can afford.
Over 3400 presets to get you started

These presets were carefully crafted to unleash your creativity. Many of our presets were created by the industry’s most successful engineers and producers.

While you can always purchase our plug-ins to own them outright, the Ensemble plug-in subscription package gives you every plug-in we have for less than a dollar a day. You won’t have to worry about updated versions because all software updates are free. And as we release new ground-breaking plug-ins, such as Tony Visconti’s David Bowie inspired Tverb, these will be added to your subscription for free.