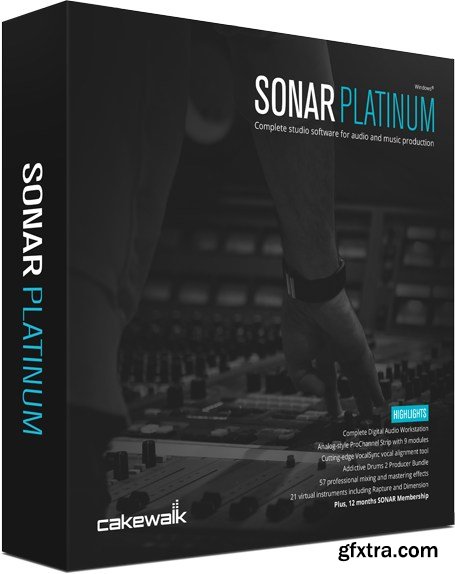 VocalSync
VocalSync tightens vocals by aligning one part to another—and it’s essential for matching dialogue to picture, synchronizing background vocals, and tightening doubled vocal parts. Use VocalSync to perfect your parts’ timing without splitting and moving clips. VocalSync is part of SONAR’s Region FX workflow—so you can process and edit multiple dub parts to a single guide track, all within the fluid workflow of SONAR’s award-winning Skylight interface.

REmatrix Solo
REmatrix Solo is a zero-latency, streamlined, single-layer ProChannel version of the acclaimed REmatrix convolution reverb from Overloud/MoReVox. It features 100 Impulse Response (IR) presets, including plates, halls, rooms, early reflections, and specialty spaces - you can even import your own IRs.

The New Control Bar
Stack, scroll, minimize, and maximize any and all Control Bar modules for one-click access to your favorite tools. When collapsed, hover the mouse over a module to display its parameters for an even more efficient Skylight environment.

Mix Recall
Never second-guess yourself on a mix again. Mix Recall lets you save and switch to various mix scenes for easy, one-click comparisons. Swap out effects, fader positions, or every parameter so that you can restore an original mix, create remixes, or just entertain a client’s suggestion. Mix tracks specifically for radio, podcast, video, or mp3, and then bounce every version in a single export.

Onscreen Virtual Controller
No MIDI controller? No problem. The Onscreen Virtual Controller lets you compose with all of your favorite virtual instruments with absolutely no MIDI hardware connected to your computer. It also supports mouse input and QWERTY keyboards so you can type MIDI compositions right into SONAR, jump octaves, and even adjust velocity without a touch screen. What’s more, a special piano for touch-enabled devices snaps automatically to the screen resolution size.

Stunning New FX Chains
From single-knob utilities, to boutique digital stompboxes, to sound-generating environments and additional effects, these new FX chains will kick-start your creativity and streamline the production process.

AudioSnap
New detection algorithms re-boot AudioSnap into a next-generation toolkit. Stretch a song from one tempo to another, sync your recordings to audio loops, tighten your drums and convert them to MIDI…and the new level of performance comes wrapped in a new look and new layout.

Addictive Drums 2
SONAR includes the world's finest drum kits and percussion instruments. SONAR Professional includes the Addictive Drums 2 Solo bundle, which lets you pick any ADpak, any MIDIpak, and any Kitpiece Pak of your choice. You’ll have tons of inspiring new sounds and rhythms for your next masterpiece.

SONAR Platinum includes the Addictive Drums 2 Producer bundle, which lets you choose any three ADpaks, any three MIDIpaks, and any three Kitpiece Paks. This is perfect for producers and music creators who work in a few different genres, because you can pick the content that covers your exact needs—you'll have great drum sounds no matter where your inspiration takes you.

16 Virtual Custom Amps
From country to metal, bass to funk, classic rock to futuristic, SONAR’s 16 new drag-and-drop amps aren’t about emulating existing amps—but creating idealized amps that can exist only in the virtual world. Get ready to change how you look at amp simulations.

Pattern Tool
The only variable separating you from your creativity is time, and the Pattern Tool—which sits in the Smart Tool palette for instant access—is all about saving time. Forget cut and paste: Simply select and paint MIDI loops and patterns across the Piano Roll View and Track View.

Improved ARA Support
While working on Drum Replacer, we realized that we could make improvements and fixes to our ARA support for Melodyne. As a result, this release now improves on Melodyne’s seamless integration inside of SONAR.

Audio Import/Export Improvements
Everyone loves more options - which is why Platinum, Professional, and Artist users can now import/export Ogg Vorbis, RF64, and over 20 other audio formats for compatibility with the very latest (as well as legacy) audio formats. In addition, MP3 Export has also been improved in this release.