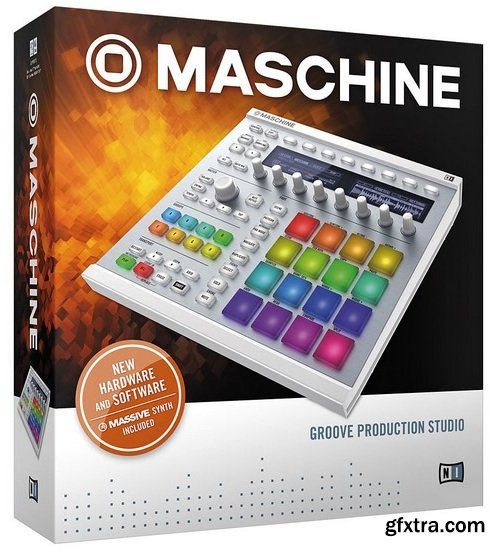 MASCHINE a revolutionary system for creating grooves tactile creative bit-making organization of recognized sound library Kontakt 5 any other VST, VSTi library.
Together with the software package for creating beats MASCHINE create quickly and easily combine the power and flexibility of software with tactile immediacy of hardware. His sequencer based on patterns, high-performance sampler, has an incredible set of professional tools and studio effects, exemplary drum synthesizers and library Kontakt 5 are you a complete system for quickly and professionally create grooves.

Maschine 2 v.2.7.7 (R502)
2.7.7 — 2018-07-25
•ADDED Previews for Group Kits and Sounds
•All Kits and Sounds in the MASCHINE Factory Library now have previews. In order to make them work, you will need to update your Factory Library to version 1.3.2 or newer via NATIVE ACCESS.
•ADDED "Formant" engine to Audio plug-in
•When transposing the pitch of a loop in the Audio plug-in, the new "Formant" mode will attempt to preserve the formants which can help keep vocals sounding natural. It can help prevent the cartoonish sounds that can occur when transposing up or down.
•IMPROVED Audio plug-in Loop recording workflow
•The Audio plug-in now stops any previous Take it was playing when recording to a new Take or new Pattern. This prevents hearing the previous Take playing back while trying to record the new Take.
•IMPROVED Tempo embedded in Audio recordings
•MASCHINE now writes both the Tempo and Loop tags to recordings made with Loop mode. Tempo is written into recordings made in Sync mode. These recordings will therefore always be in sync •with the project when loading them into an Audio plug-in.
•IMPROVED Bouncing and Exporting of Audio
•When you drag a bounced audio file from the Pattern Editor dragger to a Sound Slot or Group, MASCHINE will now load this into an Audio plug-in instead of a Sampler. Additionally, when •Bouncing or Exporting loop content from MASCHINE, the Loop tag and Project Tempo will now be written into the files. MASCHINE will read this tempo when later loading this file into the Audio plug-in.
•CHANGED Pattern Editor workflows
•The number of tools available in the software for editing the Patterns has been reduced due to redundant functionality. Instead of an arrow, a pencil, and an eraser, there is now just a pencil tool which can be toggled on and off. When the pencil is off, the mouse will behave as it did when using the arrow tool (and the mouse will look like a normal arrow in this mode). When the pencil is on, this enables the same pencil/paint functionality as before (and the mouse will look like a pencil when in this mode).
•IMPROVED Pattern Editor Keycommands
•W = toggle between "Group View" and "Keyboard View"
•S = toggle "Sampling View" on/off
•E = toggle "Pencil/Paint" on/off
•IMPROVED Count-in Recording
•Can now engage count-in recording from the software while the playhead is moving via Command + Shift + Space (Mac) or Ctrl + Shift + Space (Windows).
•IMPROVED The "Always Use Latest Version of NI Plug-ins" preference now also applies to projects
•If a project was saved using older versions of plug-ins, such as older versions of REAKTOR or KONTAKT, the newest installed versions will be used when loading the project while this preference enabled. If the preference is off, MASCHINE will attempt to load using the versions originally used when creating the project. Additionally, if only newer versions of the required plug-ins are installed on the system, the newer versions will be used even if this preference is turned off.
•CHANGED MIDI Change and Scene/Section Retrigger locations
•MIDI Change (where you assign MIDI messages for changing Scenes, Sections, and Locks) is now accessed through the Edit menu. Scene & Section Retrigger options are now found at the bottom of the the Perform Grid drop-down menu. The "gear" icon in the Global Header where these options used to be accessed has now been removed.
•FIXED Cubase, and possibly some other hosts, could crash when unloading MASCHINE from a track or when quitting
•FIXED Crash/hang when changing Audio Interface to ASIO and back to WASAPI
•FIXED QuickBrowse is not working when pressing the magnifying glass button on the hardware
•FIXED Audio might not play when switching between Loop mode and Gate mode if there are overlapping MIDI notes
•FIXED Applying Randomizer disables Audio plug-in for the Pattern
•FIXED Reverb isn't working at certain sample rates
•FIXED Single Scene Export is slightly too long
•FIXED Enabling/Disabling MIDI Ports via MK3 Settings page didn't take effect until opening and closing the Preferences in the software
•FIXED One of two MASCHINE instances crashing when turning on a connected MASCHINE MK3
•FIXED Resizing a selection of multiple notes would depend on speed of mouse movement
•FIXED Displaying the Sampling area would create an undo step
•FIXED Mouse could sometimes freeze when deleting automation lines via double-click
•FIXED Automation handles would sometimes freeze when dragging with the select tool
•FIXED Selected type tags would overlap with the "Types" label when collapsed
•FIXED When copying note events via Alt + mouse drag, the currently selected note event could sometimes appear behind overlapping notes
•FIXED Contrast setting in software preferences for Maschine MK2/Mikro MK2 controller was broken
•FIXED Exported audio loops would sometimes be slightly too long
•FIXED Audio plug-in would sometimes stop playing when switching between Loop and Gate mode during playback, especially if the Pattern contains overlapping notes
•FIXED On MASCHINE MK2, the "Browse" screen would look incorrect when pressing "Shift"