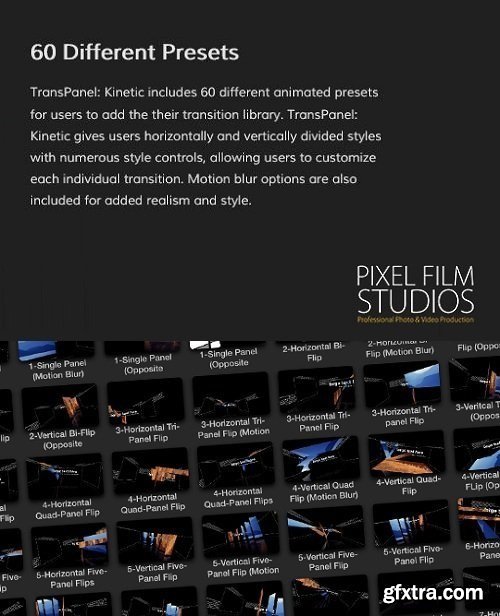 TransPanel: Kinetic is an exciting new pack of animated panel transitions designed specially for FCPX. TransPanel: Kinetic allows users to divide up each shot, and flip it into the next. These transitions include editable text and environment controls, along with numerous keyframe-less animations for added versatility. FCPX users can now create professionally styled animated transitions seamlessly with no effort.

Fully Customizable Camera Controls
Advanced camera controls are just one of the many intuitive features included in TransPanel: Kinetic. FCPX users can change the camera path and angle of the focus point, allowing endless options and looks to be created within each transition. Users can also change the angle of view for more interesting perspectives in each preset.

Includes Editable Text
TransPanel: Kinetic includes editable text within the environment, that users can modify to fit each style of shot. Change the phrases and move them around in 3D space to make each individual transition look different from the last. Users can add in messages and keywords to match each project, quickly and easily.