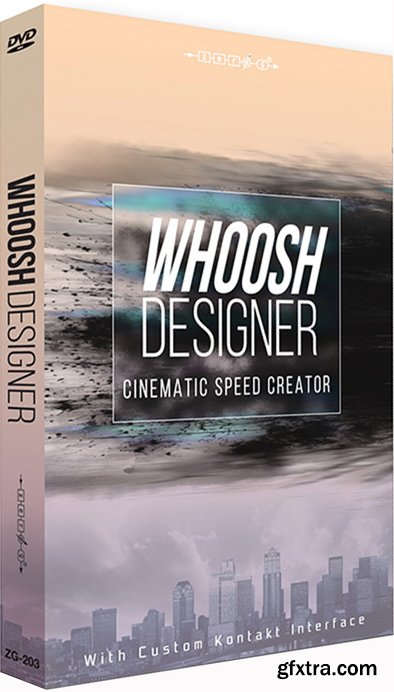 Whoosh Designer makes the best whoosh noises you will ever hear! Whooshes are short noise sounds that give an instant rush of movement, excitement, anticipation and release. Placed around an impact sound they add massive size and power. Placed under a drum fill they add an almighty rush and a powerful transition from one section to another.

Whooshes have the power to transform all sound and music into a higher dimension of drama and animation. Sound design, trailer music, epic music, film scores, EDM, hip-hop, indie, rock; whatever you are doing, adding whooshes will make your sound more exciting.

Whoosh Designer is a Kontakt Instrument* that combines amazing raw sounds, incredible simplicity, a high degree of playability and a very high level of customisation. Every Whoosh is made up of 3 elements - ATTACK, PEAK and DECAY. These 3 elements are the initial attack, the intense peak of the whoosh and the long release of the sound. This Whoosh Designer instrument quickly crossfades between 3 different sounds in order to produce sonic complexity and a very wide range of possible variations.

There are many millions of possible variations so you will never run out of sonic possibilities.
We’ve included over 160 presets themed in sections such as Clean, Detuned, Distorted, High Speed, Reverse Stops and Rhythmical.

Added to this is a GUI which allows for total sonic manipulation and includes pitch, drive, compression, pan, filter, delay and reverb controls to make the aural possibilities truly infinite.