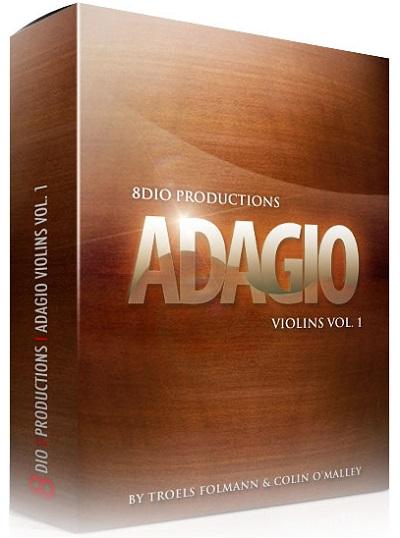 8dio Adagio Violins v1 KONTAKT SCD MERRY XMAS-SONiTUS | 22.5GB
ADAGIO is the air, the flow, the burn and the sorrow of symphonic strings. Produced by Academy Award, TEC and G.A.N.G Award Winning Composer, Troels Folmann and Emmy nominated composer and orchestrator, Colin O’Malley,  8Dio Adagio String Series marks the most expressive collection of deep-sampled emotional strings ever created. Adagio contains a variety of advanced techniques that were specifically developed for the library. The techniques allow you to create completely realistic string sequences with true emotion and passion. You don’t need to be a master orchestrator to sound great.

Adagio Violins is our first release, which will be followed by Cellos, Violas and Basses later in 2012. Adagio Violins contain three main groups of violins. Full ensemble Violin (11), Small Ensemble Violin (3) and Solo Violin (1). All groups have been extensively sampled and recorded in a signature church environment with a hand-selected group of master violinists. All groups were sampled with three different microphone positions (close, far, mixed). We employed all current generation sampling techniques (ex. true legato, deep sampled repetitions etc).  New techniques were also developed to capture a higher level of emotion and humanity in the performances.  The result is a passionate virtual instrument which is extremely agile to play.

Adagio is next-generation orchestral sampling.  We recorded 10 different types of liquid legato to cover the vast majority of natural flow techniques.  The legato performances are modeled around lyrical melodies, capturing some of the spirit of the composers we love. The power of this approach cannot be over stated.  Adagio captures great musicians performing as they were born to….never a static moment.  Legato intervals were sampled up to 4 times round robin allowing for an even greater degree of realism.  Loure or “floating notes” are also a key part of Adagio, allowing composers to perform repeated notes with connectivity.  We’ve also included unprecedented “Loure Legato” patches.  They have to be played to be believed.

Adagio allows for traditional dynamic cross-fading of sustains to shape notes. In addition to this, we deep-deep-deep sampled “Dynamic Bowing” articulations.  These are notes that weep and soar effortlessly.  With our intuitive programming we believe this “dynamic” approach is far superior to traditional cross-fading in the quest for a final degree of musical realism.  It’s more AIR then you can breathe in a lifetime baby.

Comprehensive short notes are another highlight of Adagio.  With feathery spiccatos, biting marcatos, lively pizzicatos and more, Adagio is both nuanced and acrobatic. Short notes are sampled in up to 10 round robins.  The attacks of the notes have an energy and musical imperfection that will re-define your string template.  Trills, tremolos and measured tremolos are also sampled in great depth for an extra shimmer or relentless pulse in your music. Adagio is an intuitive out-of-box tool. It works fluently without mangling.  It also offers tremendous control and flexibility.

Adagio 1.1 upgrades includes:
+24GB/33.300 samples of new- and polished content
All legatos have been polished to perfection.
New mix for close microphones with more clarity and lushness.
2nd Violins for ALL articulations.
Lite patches using DFD (ex. cuts Instinct legato from 500MB to 22MB)
Vibrato control incorporated into legato. We went back and recorded non-vibrato and vibrato sustains and added it to the volume.
Multi-Legato patches with ability to switch fluidly between 3 legato types.
Reprogramming of all short notes – much more lush and rich.
Tempo-synced loure for both K4 and K5 users.
40 New Bonus Ambiences
Output mapping allowing routing of mic positions to different outputs.
About a million other things.