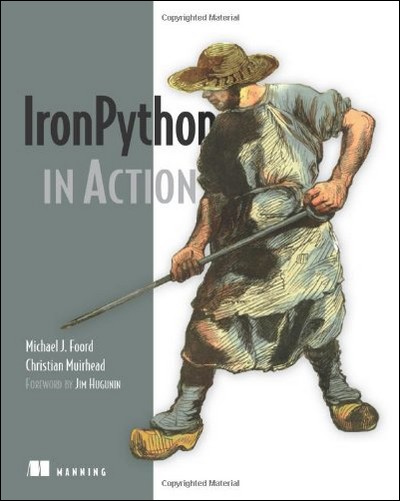 Book Description
In 2005, Microsoft quietly announced an initiative to bring dynamic languages to the .NET platform. The starting point for this project was a .NET implementation of Python, dubbed IronPython. After a couple years of incubation, IronPython is ready for real-world use. It blends the simplicity, elegance, and dynamism of Python with the power of the .NET framework.IronPython in Action offers a comprehensive, hands-on introduction to Microsoft?s exciting new approach for programming the .NET framework. It approaches IronPython as a first class .NET language, fully integrated with the .NET environment, Visual Studio, and even the open-source Mono implementation. You?ll learn how IronPython can be embedded as a ready-made scripting language into C# and VB.NET programs, used for writing full applications or for web development with ASP. Even better, you?ll see how IronPython works in Silverlight for client-side web programming.

IronPython in Action explores these topics with examples, making use of the Python interactive console to explore the .NET framework with live objects. The expert authors provide a complete introduction for programmers to both the Python language and the power of the .NET framework. The book also shows how to extend IronPython with C#, extending C# and VB.NET applications with Python, using IronPython with .NET 3.0 and Powershell, IronPython as a Windows scripting tool, and much more.

About the Author
Michael Foord has many years of Python under his belt as well as hands-on commercial experience with IronPython. Michael has written many articles on Python, including the official ?HOWTO? Fetch Internet Resources Using urllib2?. He has also written articles on IronPython and has spoken about IronPython in the U.S., England, and Poland. He is the author of several popular open-source Python projects and has a blog on all things Python.

Christian Muirhead began his career in a high-volume database environment, and for the last eight years has been building database-driven websites. He has five years of experience working with C#, the .NET framework, and ASP.NET. he has been using Python in most of his projects since discovering it in 1999, including building web applications for the BBC using Django. He is now working at Resolver Systems developing a next-generation data-modeling tool in IronPython.