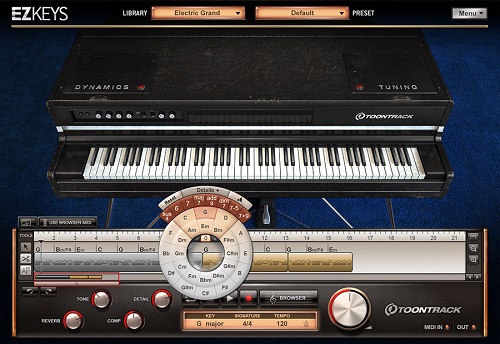 Toontrack EZkeys Electric Grand v1.0.0 Incl Keygen WiN MacOSX-R2R
WiN: 544MB | MacOSX: 432MB
EZkeys Electric Grand comes with a carefully sampled Yamaha CP-80. This groundbreaking instrument was first introduced on the market in the late 1970s as a compact, electric option to the regular grand piano and has since become a modern classic, immortalized in chart-topping songs by a wide range of artists spanning across the genres. Even today, some 30 years after its inception and since long out of production, the analog, electric and amplified hybrid sound of the CP-80 keeps playing a key role in modern music. With the included broad genre mixer presets, the classic, crisp sound will expand beyond the conventions and make this instrument a must in every versatile songwriter’s palette of audio tools.

Feature:
• 32- and 64-bit VST, AU and RTAS instrument as well as low latency stand-alone application
• Drag and drop the included MIDI straight to the built-in song track
• Drag and drop support for your own or third party MIDI straight into EZkeys
• Drag and drop MIDI from the song track or directly from the song browser to your DAW or to your desktop
• EZkeys will analyze and chord-separate any MIDI on the fly
• Record or overdub MIDI directly in EZkeys
• Use your own, the included or any third party MIDI/chord progressions and transform with playing styles found in other MIDI files
• Quickly add basic chords to the timeline or drag and drop any chord from the Chord Wheel
• Real-time chord display that enables you to instantly see what chords you are playing
• Chord selector, based upon the circle of fifths, allowing you to change chords instantly
• Presets for the most commonly used chord types
• Customize the coloration of any chord by opening up the detailed view
• Alter the voicing of a chord on the fly by clicking the - or + buttons in the Chord Wheel
• "Humanize" any pre-quantized MIDI upon import in EZkeys
• Transpose individual song blocks or full songs
• Export songs or files as wave files straight from the EZkeys interface
• Comes with an easy to understand music theory document including MIDI examples
• Possibility to tune the piano by octave, semitone or cents
• Dynamics controls that let you adjust the velocity response to match your keyboard or playing style
• Three pedals: sustain, sostenuto and damping
• MIDI-learn and automation
• Ready-made presets utilizing high-quality effects from Overloud. The presets range from raw and unprocessed to heavily tweaked