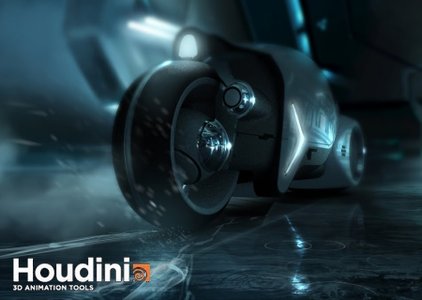 Side Effects Software, an industry leader in 3D animation and visual effects software, is proud to announce the immediate release of Houdini 13 which introduces a finite element solver for bending and tearing FX, a new multi-threaded particle architecture integrated into Houdini’s existing dynamics context and a new lighting workflow to efficiently handle massive datasets.

From faster, more flexible particle tools, to a new lighting workflow, to the adoption of open standards such as OpenEXR 2 and OpenSubdiv, Houdini 13 will increase productivity and allow for bigger more impactful VFX. Whether you are a feature film VFX artist, a game developer or a commercial studio, this new release brings you new and enhanced tools that will meet the most demanding production requirements.

NEW PARTICLES
Particles have always played a key role in the creation of VFX in Houdini even as Rigid Body Dynamics, Fluids and Cloth effects have begun to take over. With Houdini 13, particles have been fully integrated into the dynamics context for better behaviour, more control and interaction with other simulation tools. This vex-based architecture is multi-threaded and allows for speeds up to 10x faster and cached results that allow for scrubbing back and forth in the timeline.

To control these particles, there is a new stream concept as well as the use of VEX-based expressions which are much faster and more flexible. There are also new tools and forces such as the Axis Force which uses 3D volumes to control particles.

NEW FINITE ELEMENT SOLVER
To create realistic destruction effects, the industry is moving to the use of finite elements. In Houdini 13, the Finite element solver brings this leading edge technology to the forefront.

The Finite Element solver analyzes the stresses on an object then either bends or breaks the object. It can also be used for soft body effects with volume preservation. With the new Finite Element solver, Houdini 13 will take the simulation of digital destruction (and gooey slimy objects) to the next level.

NEW LIGHTING WORKFLOW
A new lighting workflow has been built around the use of Alembic and Packed Primitives as a way of efficiently managing massive datasets.

This new workflow offers a new Data tree view for working with the Alembic files and assigning materials and light assignments. This new workflow is linear out of the box and along with improvements to the quality and performance of Mantra offers a powerful set of lighting tools. In professional production pipelines these new tools will offer a robust solution that makes Mantra’s physically-based rendering a very attractive option.

ENHANCED BULLET SOLVER
The Bullet solver in Houdini is now more accurate and supports most geometry types out of the box. it is much faster and scalable and can be used in conjunction with packed primitives for efficient instancing of pieces. There is also a new debris shelf tool for adding detail to really sell a shot.

ENHANCED FLIP FLUIDS AND OCEAN FX
The FLIP fluid and Ocean FX tools in Houdini continue to evolve with a new mist solver, new shelf tools and a new Fluid surfacer that is much faster. A new ocean material is available and the integration of FLIP fluid sims and larger OceanFX surfaces is easier than ever.

OPEN STANDARDS
Houdini continues to support industry standards which make it easier for artists to work in a multi-application environment.
- Alembic by ILM and Sony Imageworks plays a key role in the new lighting workflow in Houdini 13.
- OpenEXR 2 by ILM is now supported to allow for deep compositing of Mantra renderings in Nuke.
- OpenSubdiv from Pixar which provides viewport subdivision display, geometry-level subdivides, Mantra integration and continued support for crease weights.
- OpenVDB from DreamWorks Animation continues to evolve and played a big part in making the new particle surfacer faster and more memory efficient.

NEW PACKED PRIMITIVES
Packed primitives are a new initiative to take the concept of a delayed load archive and put it right into Houdini. It offers a generalization of the Alembic file format that supports all geometry types in Houdini.

A complex model can be packed up into a single primitive for efficient management of huge datasets and faster cooking with a lower memory footprint. It offers a hierarchical structure and multiple visualization choices and allows for efficient instancing when using Houdini’s copy node.

Packed primitives can be used when lighting and rendering a scene or when simulating lots of similar objects. This new technology will offer efficiencies throughout your pipeline and will let artists work more interactively with big scenes.

Win 8 users with geforce cards should not use driver 310 or 314(houdini will hang). Nvidia has fixed this issue and it's currently available in their 320 driver.