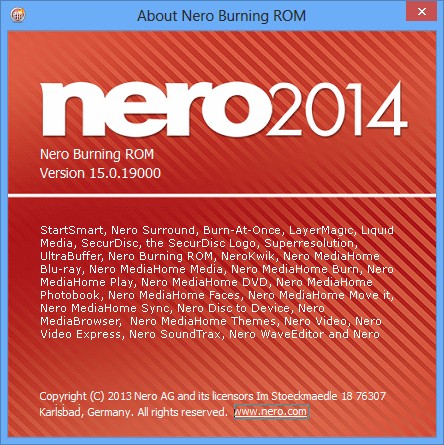 Advanced, reliable & secure disc burning – now Windows® 8 ready
There’s a reason Nero Burning ROM is the application you’ve trusted for years with your most important data. Its advanced disc burning engine simply lets you burn reliable and secure CDs, DVDs and Blu-ray Discs™. With more incredible new features and support for Windows® 8, there’s no reason to use anything else.

Span large files efficiently across multiple discs, automatically
Don’t waste discs. With Nero DiscSpan, you can split oversized files and burn them to multiple discs. With the all-new Nero DiscSpan SmartFit feature, go even one step further and automatically span the data across the fewest number of discs possible. Even mix disc types to use your optical media economically.

Rip audio from CDs and convert audio
Still one of the easiest ways to make your own compilations and take your favorite playlists with you anywhere. Use Nero Burning ROM to rip audio CDs to your PC, remix them and create your own discs to play on your home or car stereo. Also convert your audio files to a great variety of high quality audio formats including APE, FLAC, AIFF, OGG, and more. Set variable bitrates for MP3/MP3 PRO to gain highest quality output with minimum amount of storage space.