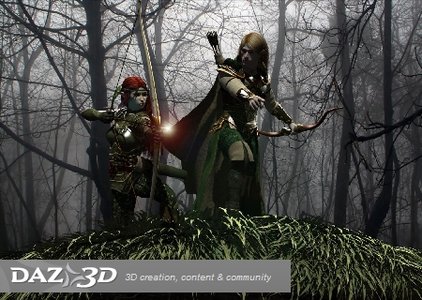 DAZ Productions originated as the Poser-production division of Zygote Media Group, Inc., in Provo, Utah where the content included within Poser 3 and 4 was born. After creating the default content for MetaCreations, Daz developed the "Millennium Woman" Victoria and the "Millennium Man" Michael figures. With a tremendous positive response from the Poser user base, DAZ gained a strong reputation as the premier source for Poser oriented digital content. In December of 2000, DAZ branched off from Zygote, and became a freestanding corporation. In January 2001, DAZ Productions opened its first e-commerce website with 159 products. DAZ has built a business by creating 3D digital content at affordable price points offered to the public via an online store. DAZ also works closely with third party artists and offers an online publishing program through which these artists can make their own creations available to the DAZ customer base.

The company now sells over 3,000 products to a constantly growing group of customers. DAZ has a variety of software solutions designed to expand the market for digital content, including the increasingly popular DAZ Studio software application. DAZ Studio removes the barrier to entry for newcomers to the 3D industry, as it is offered free of charge. DAZ Studio provides an environment where users may take their favorite 3D assets and easily create art or animation for either recreational or professional endeavors. With a free, easy to use 3D tool, DAZ hopes to reach new industries and individuals that would otherwise be excluded. DAZ continues to focus primarily on creating digital content, and only develops items that help increase the demand for future DAZ digital content. With this in mind, DAZ continually develops new versions of their popular "Millennium" figures, as well as developing relations with the most successful third party content creators.

Want to create a realistic object? An alien creature? A video-game setting? A fancy flying car? Hexagon will give you the right tool at the right time. Check out the sample projects below and watch the videos which will give you just an idea of the power and ease-of-use of Hexagon.

- Realistic Objects
Hexagon offers a comprehensive toolset of curve drawing and management, and of surface creation tools that allows to build complex realistic objects with ease and efficiency.
- Alien Creatures
Equipped with the wide range of direct polygon and vertex tools, plus instant surface subdivision and soft selection and tweaking tools, Hexagon is the ideal modeling software for bringing the wildest creatures from your imagination to life!
- Setting Design
With its volume design toolset (including thickness, boolean and chamfer tools) enhanced by a complete palette of assembly tools such as a unique interactive multiple-copy feature, Hexagon will help you build intricate settings and environments.
- Flying Car
Hexagon gives you the power to freely build and refine any kind of vehicle, with or without bio-design inspirations. You can easily mix box-modeling techniques with more accurate vertex tools, as well as with advanced surfaces capabilities.

UI Changes:
-Scultpie primitive creation tools have been added to the Second Life menu.
-The registration dialog has been removed as it is no longer a required feature.
-To reduce the installer size, documentation and video tutorials have been moved to an online source and the help option will launch the URL.
-Removal of multiple listings of Taper tool in the Tools menu.
-Version number has been changed to a four number format: i.e., 2.5.0.1.
-Fixed an issue where popup menus could appear off the screen when the menu was initiated near the edge of the application.
General:
-Issues with DAZ Studio 1.7 and C++ run time library: Since the new release of DAZ Studio (1.8+) the C++ run time library error has been corrected.
-Added more appropriate warning to the smoothing operation to indicate when the operation may be too intensive.
-Found several cases where un-initialized values were being used which would cause internal errors. This should make the application more stable.
3D Camera:
-Resolved an issue where the camera could be zoomed in too far which would cause the direction vector to be undefined and control of the camera would be lost.
File Loading:
-Improved 3DS file loading to handle materials.
-Updated 3DS loading file library to a more recent release.
-Improved OBJ file loading in how it handles materials.
-Attempts at using un-initialized variables no longer causing internal errors when loading some files.
Tesselation:
-Resolved an issue where subdivision could use an unreferenced variable which would cause an internal error.