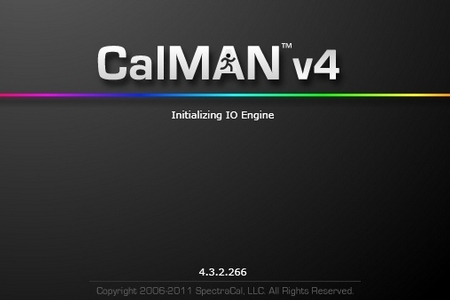 SpectralCal CalMAN v4.5.0 Internal Development Edition | 164 MB
In its short time in the market, CalMAN has so thoroughly redefined the potential of video calibration software that CalMAN’s market share now approaches 100%. CalMAN Version 4 redefines the limits of the possible, with unprecedented power and ease of use, including direct interactive control of video processors and displays. Rather than hunting through cryptic menus for the internal command that will adjust RGB balance, a CalMAN v4 user can now just adjust the relative levels of the bars in an RGB graph, and CalMAN does the rest, automatically writing the adjustment into the device.

Calibrating Color Management Systems (CMS) has a long reputation for being notoriously difficult; the revolutionary CalMAN v4 lets you simply reach into a CIE chart and drag each color right to where you want it to be.

Simple to use Brightness/Contrast, Gamma, CIE, Color Temperature, Gamut Luminance, RGB Balance, and Delta E graphs, with literally hundreds of custom graph and data table possibilities, so you can always view measurement and adjustment data in exactly the best way to optimize your calibration efficiency.

Exclusive step-by-step workflow wizards guide you through each calibration step.

Inherent design mode makes it so easy to edit, save, and load layout files to change the calibration workflow, data charts, and note boxes to match the way you work. Simply drag a graph or other screen element to where you want it, set its display options, and save your updated layout.

No other video calibration product has ever accomplished what CalMAN Version 4 does, with its unique Interactive Charts that allow automated adaptive control of video processors and displays.

MultiThreaded for Maximum Performance
CalMAN Version 4 is multithreaded from top to bottom. Multiple I/O operations can be launched at the same time, while you continue to use the elements on the screen. This makes CalMAN much more responsive. It also makes every operation faster. A grayscale run that took two minutes in CalMAN v3 takes thirty seconds in v4.

Great New Look
CalMAN Version 4's user interface has been completely rewritten from a clean start. The look is fresh, clean, attractive, intuitive, and extremely flexible.CalMAN v4 is one of the first commercial applications developed throughout using Microsoft's latest platform technology: Windows Presentation Foundation. Yet one more way in which CalMAN is bringing you the future.