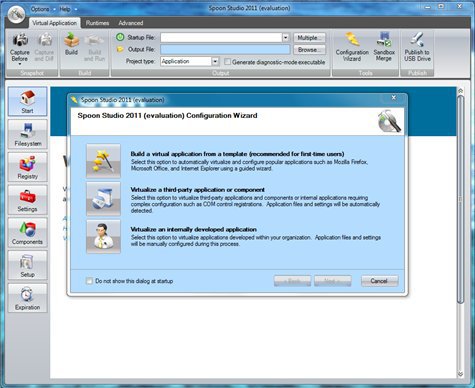 Why You'll Love It:

Get Started Quickly
Easy-to-use templates allow painless buildilng of hundreds of popular applications. Or, use the simple setup snapshot or MSI import tools.

#1 in Compatibility
Spoon is the only engine in its class to support both 32- and 64-bit applications. And Spoon virtualizes services, databases, DCOM, SxS, and other advanced OS features.

Legacy Apps on Windows 7
Spoon allows legacy applications such as Internet Explorer 6 to run properly on Windows 7, reducing the costs and risks associated with Windows 7 migrations.

Virtualize 32- and 64-bit Apps
Spoon virtualizes even the most powerful and complex applications on the planet – without breaking a sweat.

Eliminate Dependencies
Virtualize popular runtimes and components such as the .NET Framework 2.0, 3.0, 3.5, and 4.0, Java, AIR, Silverlight, and Flash.