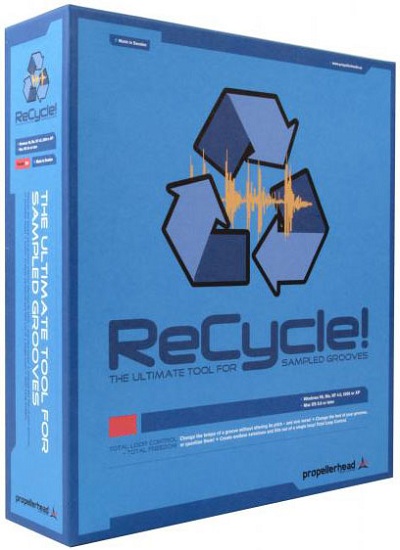 Propellerheads ReCycle v2.2 WIN OSX Incl Keygen-AiR | 22MB
ReCycle is a creative tool that helps you make the most of your grooves. In simple terms, ReCycle lets you do with sampled loops what you can do with beats programmed from individual drum sounds – like alter the tempo, or replace sounds and process them individually. A tool for quickly editing sampled parts, chopping up riffs, remixing and doing mash ups.

ReCycle 2.2 Fix
The program is now compatible with 64 bit operating systems.
ReCyle 2.2 is also a true Cocoa program under Mac OS and fully compatible with Mac OS X 10.7 Lion. ReCycle 2.2 requires a Mac with an Intel processor. PowerPC is no longer supported.
The main window has been graphically redesigned, including new zooming and scrolling. Scrolling is smoother and you can now zoom in further. Some redundant controls have been removed and others added.
When exporting AIFF and Wave files, Record/Reason-style tempo information is now included in the file. Also, when importing audio files created in Record or Reason, the tempo information in those files is used for setting tempo and length in ReCycle.
The Waveform now indicates graphically what sound will be played back, by dimming silent sections.
You can now use the Q, W, E and R keys to select tools.
The max length of audio files you can edit in ReCycle is no longer limited to five minutes.
New online help on Mac and Windows.
The Preference dialog has been streamlined and updated.
Open Recent (documents) is now a sub-menu on Mac OS.
The status bar has been removed.
We have removed support for the Sound Designer II, Mixman and SampleCell formats since these are all outdated.
The authorization system and copy protection has been changed, reducing the risk of having to reauthorize the program.
Installation under Mac OS is now drag and drop (no installer).