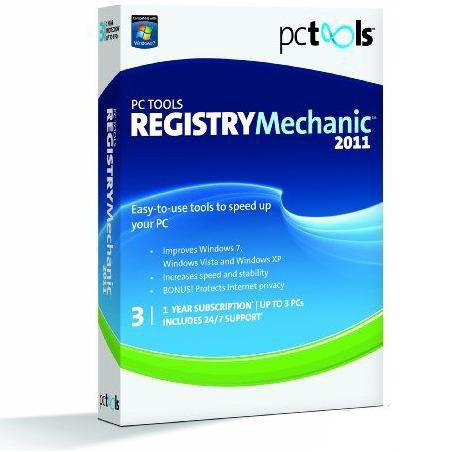 PC Tools Registry Mechanic 11.0.0.277 | 4 MB
Registry Mechanic is an advanced registry cleaner for Windows® that can safely clean, repair and optimize your registry in a few simple mouse clicks! With Registry Mechanic you can safely clean, repair and optimize the Windows® registry with a few simple mouse clicks! Problems with the Windows® registry are a common cause of Windows® crashes, slow performance and error messages. By using a registry cleaner regularly and fixing registry errors your system should not only be more stable but it will also help improve your system performance without expensive hardware upgrades. Learn more about the importance of a clean registry with our registry insight. With a few easy steps Registry Mechanic will scan your entire registry for any invalid entries and provides a list of the registry errors found, you can then choose to selectively clean each item or automatically repair them all.

• Safely repair invalid entries in your Windows® Registry, which can lead to Windows® crashes and error messages
Over time, invalid entries and orphaned shortcuts can accumulate in the registry as a result of uninstalling or incorrectly removing software from your system, having missing or corrupt hardware or software drivers, or deleting files referenced by shortcuts. Registry Mechanic can safely clean and repair invalid entries from your registry with a few simple mouse clicks.
• Improve operating system performance and stability by removing orphaned references in your Windows® Registry
Registry Mechanic's ability to streamline your Windows® Registry and remove orphaned references can significantly improve your system's stability and performance.
• Scans your hard drive for invalid and incorrect program shortcuts
Registry Mechanic can scan for invalid and incorrect shortcuts in customizable locations on your computer.
• A highly functional Scan results screen
The Scan results screen provides full text search capabilities to allow for rapid problem identification using text strings, and expandable and collapsible problem views.
• Automatically creates Windows® Registry backups with each repair, with the option to restore them
Registry Mechanic automatically creates a backup of all changes it makes to the registry, allowing these changes to be restored to their original condition at a later time. On Windows® XP operating systems, Registry Mechanic also allows the creation of Windows® System Restore points prior to implementing repair changes, as an additional backup measure.
• A Registry Monitor feature
Registry Monitor is designed to assist in keeping your system free of Windows® Registry errors. Registry Monitor observes your Windows® Registry and alerts you when a specified number of changes have been made to key areas of the registry. When alerted, you have the option to run a silent scan. This optional feature can begin monitoring your registry as soon as Windows® starts up.
• Compacts the Windows® Registry for optimized system performance
Registry Mechanic incorporates a registry compacting feature, which analyzes, rebuilds and compacts the Windows® Registry by removing registry gaps and free space, and corrupt keys.
• An 'Optimize Your System' feature
Registry Mechanic implements a system optimization function which, at the click of a button, applies a set of tweaks and patches directly into the Windows® Registry that are designed to improve system performance. This feature also includes boot file defragmentation and rebuilding, and sorts and refreshes the Windows® Start Menu items list, all of which is designed to improve the efficiency and speed at which Windows® starts up.
• Ability to conduct an automatic scan at Windows® startup, for continued system optimization
Registry Mechanic can be set to conduct a background scan each time you start up your PC. The Repair function can also be set to run automatically at the end of a scan, thereby allowing you to continue using your system without the need to interact with Registry Mechanic.
• Other customizable features, including:
o An Ignore List, allowing you to prevent specific items from being detected and repaired in subsequent scans. Items can be added directly to the list or from the results of a scan.
o The creation of informative, user-friendly logs, listing details of items found and memory resources available on your system.