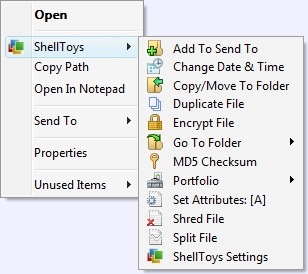 CFi ShellToys 7.3.0 (x86/x64) | 18 Mb
CFi ShellToys puts all the tools you need right where you need them – just a click away on your context menu. Right-click one or more files or folders, the desktop or the window background for instant access to over 50 context-sensitive shell extensions.

Features:
• 50 new shell extensions in one unique package, plus 20 extra shell tools!
• Customizable – you choose which extensions, tools and features you want to use
• Don't like right-clicking? Assign hotkeys to your favorite tools for fast keyboard access
• Context-sensitive help throughout – press F1 in any ShellToys window or dialog
• Free lifetime updates and unlimited free support by email for registered users
• ShellToys can be used in 32-bit versions of Windows Vista/Server 2003/XP/2000/ME/98

Changes and additions in ShellToys 7.2.0:
- Shred File can now shred a single selected folder, including (of course) its entire contents. A progress dialog is now shown during shred operations and, for multiple files, an emergency 'Stop' button is included.
- Extended Delete now provides a checkbox option that allows files to be deleted immediately, bypassing the Recycle Bin.
- Batch Rename has been tweaked to add the following: (1) A 'Variables' menu making it easy to allow filesize/date-related file properties to be included in filenames; (2) On the 'Simple Rename' tab, an extra pair of 'Replace text' fields allows two text replacements to be made in a single pass; (3) New 'Add extension' checkboxes allow new file extensions to be appended to the original extension rather than replacing it; (4) Additional files can be dropped into the dialog to include them in the list of items to be renamed.
- The Change Date & Time dialogs have been improved and clarified, with additional hyperlinks to quickly set or copy dates.
- In Change Date & Time, when one or more folders is selected, a checkbox option allows the specified date and time to be applied to the entire contents of each folder along with the folder itself.
- In Set Attributes, if a folder is selected, a checkbox option allows the specified attributes to be applied to the entire contents of that folder.
- In CFi Explorer, a new 'Exit and Save Session' option on the Tabs menu saves the current tab setup and closes the application: the same tab collection is recreated next time CFi Explorer is started. In addition, a new 'Always save session on exit' option can do the same automatically each time you exit CFi Explorer.
- CFi Explorer now includes a link to the Control Panel's Folder Options dialog on its Tabs menu.
- The Clear Temp tool, which clears the Temp folder on system startup, now offers an option to retain temporary files modified within the last 24 hours, on the basis that they may be required as part of an ongoing software installation/removal.
- In Windows 7, certain ShellToys batch-processing tools now make use of on-taskbar progress bars, allowing you to monitor their process while doing something else.
- The MD5/CRC32 tool now also calculates SHA1 hashes (and sports a fairly-obvious new name as a result). A new 'Compare to file' hyperlink allows you to quickly check whether the selected file is identical to another. Hashes are now calculated significantly faster than in previous versions.
- The Go To Folder dialog, displayed if you assign and use a hotkey for the Go To Folder tool, now includes two additional tabs besides your own list of folders. A 'Recent Folders' tab lists recently-used folders, and a 'Common Folders' tab lists useful system locations.
- The Copy Path tools now offers a new 'URL' (file:///) format for copied file paths.
- When displaying the following ShellToys tool dialogs, additional files (and folders, if supported by the relevant tool) can be dragged-and-dropped into the window to be added to the list of items to be processed: • Batch Rename; • Convert Audio Files; • Convert Images; • Resize Images; • Set Attributes (when multiple items were initially selected); • Change Date & Time (when multiple files were initially selected).
- Fixes a bug in CFi Explorer in which options changed in the Options dialog were not saved if CFi Explorer was shut down by the Windows session ending.
- Fixes a bug in Convert Images in which converting certain types of JPEG image to TIFF resulted in an exception.
- Fixes a bug in which the MD5/CRC32 tool could fail when calculating hashes for multi-gigabyte files.
- Fixes a bug in Resize Images in which, when converting multiple PNG images, only the first would be processed successfully.
- Fixes a bug in Change Date & Time in which, when launched via its hotkey, any selected folders would be ignored and not listed in the dialog.
- As always, a wide variety of other small improvements, optimizations and bugfixes.