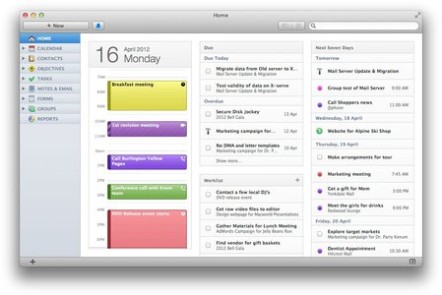 Daylite helps businesses organize themselves with tools such as shared calendars, contacts, tasks, projects, notes and more. Enable easy collaboration with features such as task and project delegation between users and never let things fall through the cracks. Create smart lists to find meaningful data fast - including delegated but uncompleted work. Work anywhere - in a networked office, from home or on the road.

New Features:
Added an option to display completed tasks in the calendar if Tasks are set to display
Tested with the latest Mavericks beta (Seeded on Oct 4th, 2013)
Bug Fixes:
Fixed an issue where merging to multiple contacts may leave the To: field blank on some emails.
Subtasks marked 'Open' (from 'Done') will be moved back to the Miscellaneous section in the Not Done list
Marking a subtask as 'Open' now properly sets its parent task(s) 'Open' as well.
Fixed an issue where some PDF included during a merge could be rendered mirrored.
Fixed a crash when trying to drag a PDF image to a person or company.
Fixed a crash that could occur when selecting the Edit menu while previewing a file.
Fixed a crash when switching away from a calendar list view.
Fixed a potential crash when importing certain ICS files in some encoding formats.
New keywords created from the Activity Sets or Pipelines preferences are now assigned to the proper types (task or appointment) instead of being assigned to People.
Fixed an issue where the subject did not appear in the email when merging a letter.
Fixed merging a letter directly to email where it was not using rich text if the letter template didn't contain any attachments
Fixed an issue where the Last Import source list for Appointments was not being created after performing a second import
Open report documents are now saved and closed before Daylite logs out or quits
Default role is no longer set as "Participant" when linking people and companies by source import ID through an opportunity delimited import
Fixed a crash which occurred when sorting by the Details column in "All Tasks" list view
Fixed the formatting of the text file when exporting from Task multi column view in CSV format
Fixed CSV importing in localized languages
Fixed file name extension when saving a TAB delimited export file
Adding a subscription calendar will automatically update the calendar view if one is showing
Fixed a potential crash when adding or syncing a CalDAV or Subscription calendar
Fixed an issue where the data in form fields could be lost after a sync.
Fixed an issue where data in a date form field was not being imported.
Fixed an issue where the form name drop-down options in the delimited importer were not displayed correctly.
Daylite Mail Assistant:
New Features:
Added compatibility for OS X Mavericks
Added the ability to create new keywords (for Email) from DMA
Results will now return inactive Daylite users even if 'Include Daylite users in searches' is off in the DMA preferences
Tested with the latest Mavericks beta (Seeded on Oct 4th, 2013)
Bug Fixes:
Fixed issue where emails with no content were being recorded if a default category for emails was set in the Daylite Preferences
Fixed an issue where some inbound emails might not save attachments
Creating additional tasks from DMA no longer adds it as a subtask of the last created task
Fixed an issue where the wrong email was being recorded, when recording a message selected within a thread
Fixed potential Mail crash when processing certain ICS files in some encoding formats
Improved performance when storing a complex email that may take a few seconds to save
Emails can only be linked after it has fully loaded into DMA
Added missing loading indicator in German localization
Fixed an issue where new email messages were not recorded in Daylite if only the 'Add to Daylite' button was clicked when no category or other linked items were set
Daylite Server Admin:
New Features:
Tested with the latest Mavericks beta (Seeded on Oct 4th, 2013)
Bug Fixes:
Fixed some cases where contacts would not sync at all when using CardDAV
Fixed some cases where repeating appointments would not be synced correctly when using CalDAV
Fixed an issue preventing contact and company relationships from syncing to Daylite on iOS
Fixed an issue where notes created on Daylite for iOS linked to forms would get removed from the device.

Remember to use Little Snitch to block DayLite server from contacting DayLite to avoid serial deactivation!