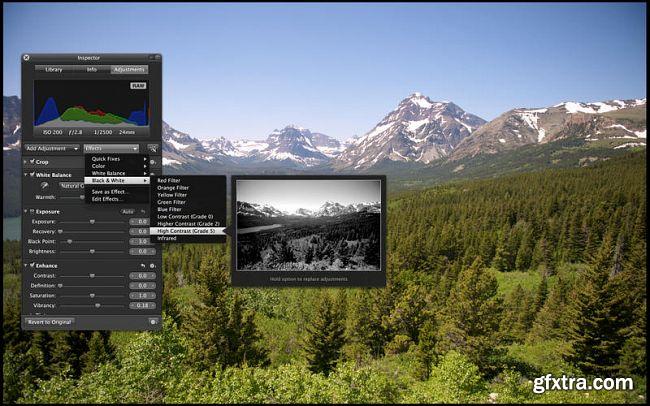 It’s the way to better photos on a Mac. With tools to retouch photos, organize libraries, share work online, and print professionally designed books.The fun begins even before you finish importing your photos. Double-click thumbnails in the Import window to view images, play videos, and hear audio files before they’re fully imported. If you’re on a deadline, you can begin adjusting an image even if it’s still being copied from your memory card to your Mac. While the files are importing, Aperture 3 grabs data like shutter speed, aperture, lens, and focus points and starts sorting it right away. You can even add your own keywords and automatically apply an adjustment preset on import. For extra flexibility, Aperture lets you store your images wherever and however you like — directly in Aperture 3, on external drives, or in their original folders. Choose to import RAW and JPEG images together or as separate images so you can work with them individually. And Aperture 3 can automatically back up your master images to a second drive during import.

You can share your photos directly to Facebook, Flickr and SmugMug and add them to shared photo streams using iCloud. You can also showcase your best work as an impressive coffee table-style photo book or as stunning slideshows that weave together photos, audio, text, and HD video.

Aperture and iPhoto Unified Library
• Share one photo library across both applications
• No need to import, export, or reprocess photos from one app to the other
• Faces, Places, albums, web sharing, and more work with both applications
• Adjustments done in either app are non-destructive and visible in the other

Organize photos using Faces and Places
• Use face detection and recognition to organize your photos by the people in them
• Explore photos based on where you took them, using robust GPS support
• Drag photos to an interactive map to add location data easily

Share photos with built-in iCloud support
• View and automatically import recent photos taken on your iOS devices
• Automatically send newly-imported photos to all your iOS devices
• Post photos and videos to other people’s shared photo streams, or create your own streams to share with friends and family
• View and add comments and “likes” to photos and videos in any shared stream

• Adds support for iCloud Photo Sharing, including the ability to post videos to shared photo streams and to have multiple subscribers contribute to a shared stream
• The Places feature now uses Apple maps to display photo locations