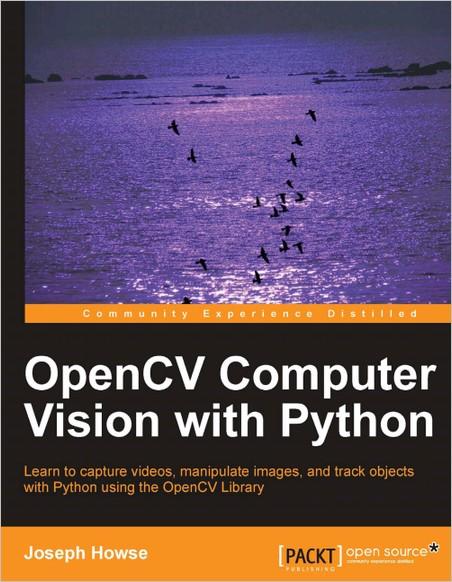 Computer Vision can reach consumers in various contexts via webcams, camera phones and gaming sensors like Kinect. OpenCV’s Python bindings can help developers meet these consumer demands for applications that capture images, change their appearance and extract information from them, in a high-level language and in a standardized data format that is interoperable with scientific libraries such as NumPy and SciPy.

“OpenCV Computer Vision with Python” is a practical, hands-on guide that covers the fundamental tasks of computer vision—capturing, filtering and analyzing images—with step-by-step instructions for writing both an application and reusable library classes.

“OpenCV Computer Vision with Python” shows you how to use the Python bindings for OpenCV. By following clear and concise examples you will develop a computer vision application that tracks faces in live video and applies special effects to them. If you have always wanted to learn which version of these bindings to use, how to integrate with cross-platform Kinect drivers and and how to efficiently process image data with NumPy and SciPy then this book is for you.

What you will learn from this book

Install OpenCV and related software such as Python, NumPy, SciPy, OpenNI, and SensorKinect—all on Windows, Mac or Ubuntu
Capture, display, and save photos and real-time videos
Handle window events and input events using OpenCV’s HighGui module or Pygame
Understand OpenCV’s image format and how to perform efficient operations on OpenCV images with NumPy and SciPy
Apply “curves” and other color transformations to simulate the look of old photos, movies or video games
Apply an effect only to edges in an image
Copy and resize segments of an image
Apply an effect only to certain depths in an image by using data from a depth sensor such as Kinect
Track faces, eyes, noses and mouths by using prebuilt datasets
Track arbitrary objects by creating original datasets

A practical, project-based tutorial for Python developers and hobbyists who want to get started with computer vision with OpenCV and Python.

Who this book is for

OpenCV Computer Vision with Python is written for Python developers who are new to computer vision and want a practical guide to teach them the essentials. Some understanding of image data (for example, pixels and color channels) would be beneficial. At a minimum you will need access to at least one webcam. Certain exercises require additional hardware like a second webcam, a Microsoft Kinect or an OpenNI-compliant depth sensor such as the Asus Xtion PRO.