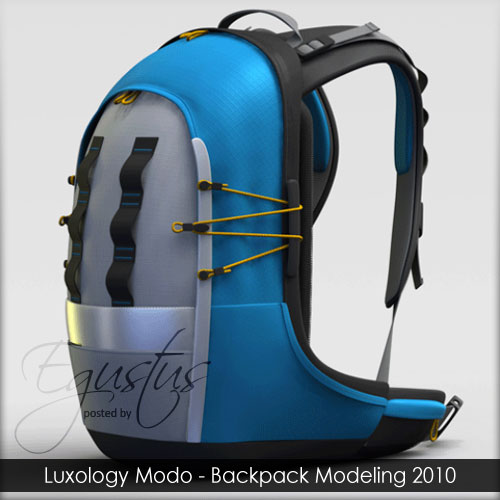 In this tutorial contains over 2 hours of video project files for each video allow for the start of any stage, and, in addition to this, some brushes for Photoshop. In lesson detail the tools and techniques of modeling the “soft things” available in modo, allowing move quickly from design to modeling, texturing and rendering (Subdivision surface model detailing, image-based sculpting, texturing, and rendering).
Soft goods modeling and rendering tutorial As many an industrial designer knows, modo is an excellent tool to illustrate designs for internal design reviews,
client approval or marketing. We asked Adam Ohern to create this video tutorial that walks through many of the real-world tools and techniques that he uses when illustrating his concept designs as a working industrial designer.
The design he created is a backpack, which not only offers the opportunity to introduce “soft goods” modeling
techniques, it also has some hard bits and interesting details like cords and stitching. The methods used by Adam
have applicability to a wide range of textile-oriented designs including handbags, gloves, flexible athletic gear and
soft recreational equipment.

The set includes over two hours of instructional video footage, and also includes incremental step-by-step modo files for each video that let you jump in at any stage. Some Photoshop brushes are also provided as a bonus. This series emphasizes real-world techniques for soft-goods design in modo, including rapid form development, Subdivision surface model detailing, image-based sculpting, texturing, and rendering. The videos are narrated
in English and are designed for people with at least an intermediate knowledge of modo. Detailed Descriptions of Videos in Album

Videos in Section 01 — Form Development
Topics covered include:
Setup: Importing of backdrop images, and the creation of a basic form, or “buck” around which to build the backpack.
Basic Volumes: Rough forms are quickly built for the main compartment, using sculpting tools, edge bevel, polygon bevel, loop slice, edge slice, and others. Volume Slabs: Once the rough forms are completed, they can be used as a starting point for creating the final “slab” forms that will comprise the final design.
Other Slabs: Creating the basic geometry for the shoulder straps, waist straps, and the back rest. 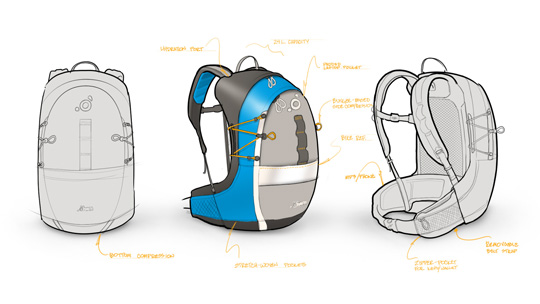 Minor Details: Adding small folds in fabric and reflector pieces.
Straps: Building the various nylon straps that hold the backpack together, using edge extend, bevel, slice, background constraints, and other handy tricks.
Buckles: Covers importing geometry from SolidWorks and/or Rhino, as well as building the buckles manually in sub-d.
Details: The zipper pulls and bungee straps on the sides of the backpack help to bring the concept
to life, and they’re surprisingly easy to do using the versatile “bridge” tool.
Sculpting: Adding the folds into the fabric on the side of the backpack can be achieved quickly and efficiently using an image-based sculpting method called “displacement mapping”.

Procedurals: The nylon materials on the backpack are achieved using a type of map called a “procedural”, in this case we’ll be using “grid” in various ways to achieve complex bump maps across our various materials.
Stitching: Stitching can add a lot of depth and character to your model, particularly if you’re able to use stitching to introduce a colored accent. Here I use a simple two-step Photoshop method to implement clean, smooth stitches simply and predictably.
Render: In this video we’ll set up our render for final output, and even take a look at the final outputs
in Photoshop, so you can get the most out of each render!
Conclusion: Parting words from the designer.