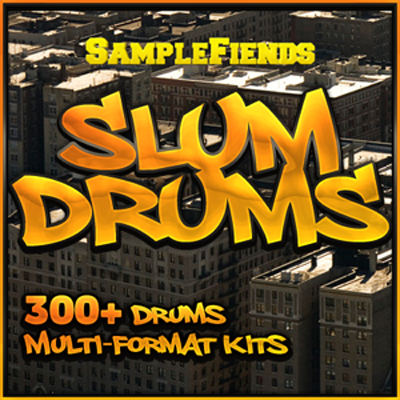 'Slum Drums' offfers over 300 amazing Drum Samples, in multiple popular formats. Each drum sound has been carefully designed to be the best it can be.

The punchiest kicks, the most crackin snares, with the utmost attention to audio quality. SampleFiends Sound Design used only the best A/D conversion, preamps and cables to ensure fidelity of every sample.

Every kit has sounds specifically matched to one another, for maximum groove and flavour. Using gear like the SP-1200, MPC2000XL and the ASR-X to harvest and craft the samples, as well as popular modern and vintage outboard gear to add even more flavour.

There is a distinctly "old-school" character that is still relevant in modern music, and an undefinable "sweetness", without being harsh or overbearing.

You won't find any throwaway drum sounds here, every sample is usable and not over-processed. Styles ranging from huge 808-inspired drums to rugged, vinyl chops to modern slaps, Claps, Snares and Toms with character, punch, snap, crackle and pop! Hats, Cymbals, Rimshots and Percussion matched to the other sounds in the kits.

Every drum has been lovingly cared for by SampleFiends to make sure they fit in your mixes right away!

Whether you make Hip-Hop & Rap, Trap, Pop and R&B, Dubstep, House, Electro, Techno or any form of Urban or Electronic Dance Music, SampleFiends has got something for you! Drums to knock your socks off!