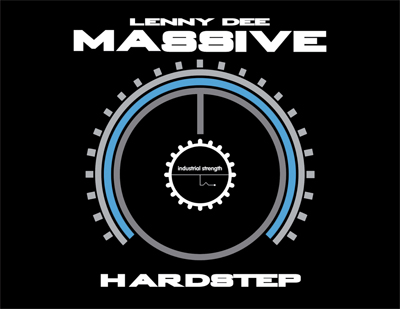 Industrial Strenght Records Lenny Dee HardStep MULTiFORMAT | 1.17 GB
Lenny Dee's Hardstep contains a wide range of NI Massive presets and small starter kits to get the juices flowing while producing Dubstep or Grime. This is not your average pack in any way shape or form. Mr Dee's mission was to create something new in which you can build ideas on while using this pack as well as being a perfect tool for your music productions. The pack was created in between his session work with Sound Boy Pussy at the Isr studios in Brooklyn New York.

To start off with, the sounds were created and all messed up using software such as Cubase 6, Ni Massive Uad, Waves, FM-8, Tal, in combination with loads of other Vst's and hardware bits.

Hardstep contains all the ISR extra's such as Acid loops, Apple Loops, Rex.2, Battery 3, Kontakt, Maschine, and Logic Exs formats for total control while using all the samples in this collection.

Since Mr Dee is the boss man here and felt no one pack can do it all. He put in a monster bonus pack featuring even more patches and audio from some of our top selling packs such as Womp, Climb, Drop, Bomb, Sweep, Vintage Breaks, Cinematic Tools, Swiss Chris, Effected, Drumshots Vol.1, Slice Vol.1 and Computer Core. All these mini packs work great in Hardstep.

It does not stop there so keep reading, we even threw in another exclusive collection of ISR patches and audio from Don Sweeten's Science of Sound, Monster Bass, Slice Vol.2, Brooklyn Gangsta, Al Pancho, Speak n Spell, 6Blocc and yes even Lenny's legendary studio partner from back in the day Frankie Bones got in on the action!

Now you cant beat that with a stick unless you got drum triggers hooked up to your sampler !

You can tell by now Lenny Dee went all out on this one, but to take his pack to 11 Hardstep also contains a exciting set of extra one shots. Mr Dee asked the ISR team to help a brother out by supplying his outrageous sample pack with a slew of really diverse drum shots to give Hardstep extra dimension and usability over the long haul.

Lenny Dee had us put this pack at a cool price with no bullshit added about Dubstep or him for that matter. This pack is hard, It's ruff and It's f…ing raw. If your looking for something really different to add to your productions then this pack should fit the bill just fine. Hardstep has a more then a few gems in it, you just need to shine them up and turn them into your golden sound or loop!