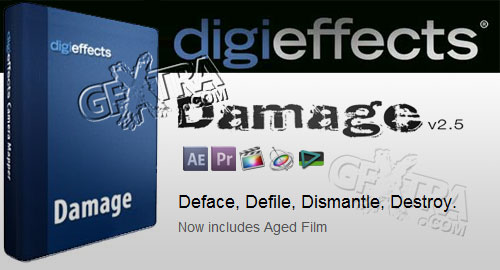 DigiEffects Damage - The new standard for creating electronic defects in your footage. If you don't hold public office or if you haven't achieved pop stardom just yet...you may find it difficult to ruin your image without help. Digieffects Damage became a sensation almost from the moment it was released. This set of visual effects plugins is dedicated to simulating analog and digital errors and defects in your footage.

All the ancient evil of analog signal defects in Skew and Interference, the modern, coldly unsympathetic digital malfunction of Artifact and Blockade...and now, we've harnessed the incompetence at the source. Two new effects in the Damage toolbox, Destabilize and Overexpose, allow you to go back in time...and not only corrupt your footage, but also ruin the image of the camera operator...

Damage 2 is simply the hugely successful collection of Digieffects plugins that the industry has come to know with more effects, greatly improved speed, a streamlined interface, and now is CS5 compatible with 64 bit native operation and 32 bit-per-channel processing...

Aged Film: Now bundled with Damage v2. Customize characteristics such as grain, dust, scratches, frame jitter and color and all those little details that tell the viewer that they're looking at historical footage. Volume discounts and floating site licenses available for multiple installations (limited or unlimited users).

Artifact: Artifact gives you the ability to individually set properties like displaced pixel blocks, color errors, frame dropping, and video compression artifacts, you can choose what can, and can't be seen due to system malfunction.

Blockade: Blockade mimics the low color fidelity rectangular "quadrants' that come from a really crummy video camera feeding a steamroller of a video codec. The color inaccuracy, block size, speed, and temporal frame stuttering are all completely customizable, giving you precise control over how much defectiveness you desire.

Destabilize: With the ability to create convincing camera shake with individual controls over each color channel, multiple axes of motion blur, and nodal rotation control, you can add a bit of uneasy drama, or jittery chaos to nearly any scene with Destabilize. Using the ability to introduce individual random variation into each parameter set means the motion that results is convincingly organic, and a product of fine control.

Interference: Interference brings you that old fashioned CRT feeling. Take any footage you have and create effects like night vision, or imply the viewing surface of a green monochrome monitor, a security camera transmission, or a consumer video format playing back like VHS or 8mm, with full control over parameters like comb filtering, field line size, noise, tint, and luminance for alternating lines, which simulate two scanned, interlaced fields.

Overexpose: Unlike simple luma or levels adjustments which act on specific pixel values and just end up looking like a poorly adjusted digital process, Overexpose processes the image in way that mimics an optical response. Overdriven whites aren't simply clipped, they bloom when a camera is acquiring an image that is “hot.” Neighboring areas of the image are affected even though those areas might not have overdriven values, luma values are affected proportionate to their relative brightness...all factors that require specialized processing to create a convincing effect. Add in the ability to vary a wide variety of parameters over time, and your ability to portray iris indecision on the part of your videographer is absolute.