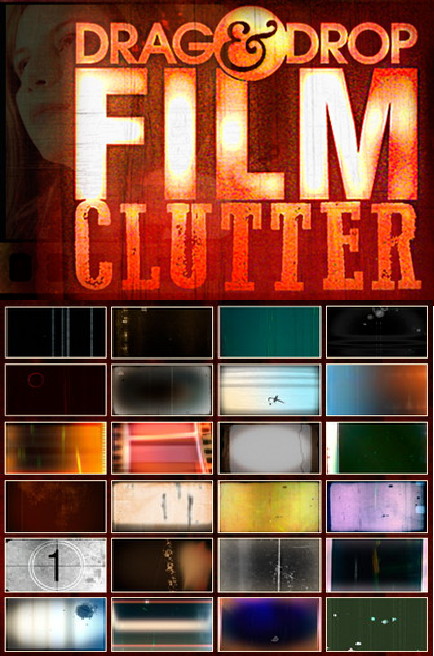 A little "clutter" is not always a bad thing. When you are talking film clutter, it usually includes the stuff that ends up on the cutting room floor -- film that's scratched, stained, contains countdowns, head and tail burns, dust, light flashes or leader marks. But here's the thing -- that kind of clutter is sometimes just what you need to add life and drama to less-than-gripping static images, footage or type treatments in your productions. This kind of clutter adds spice and character with an indie-movie bite. The problem is, this character is not the kind of thing you can plan. It has to just happen... unless you are lucky enough to have the Digital Juice Drag & Drop Series at your disposal.

The Drag & Drop Film Clutter volume includes more than 50 uniquely useful high-end film debris backgrounds, each designed to make your footage pop with an exciting edge of dirt, scratches and seat-of-your-pants motion. Simply by dragging any of these designs on top of your footage with the appropriate blend mode, you can crank your footage from boring to exhilarating, raising the production value of a piece instantly, and making you look like an editing genius in seconds flat. The frantic shading and random scratches provided by the film clutter in each Drag & Drop clip add an edgy vibe to your production, while framing and accenting your subject matter, making it stand out and giving it the drama it deserves. Combining text or logos with a Film Clutter background can also give you a quick, easy and lively-looking titling solution that will grab and hold the viewer's interest, long after the scratches have faded