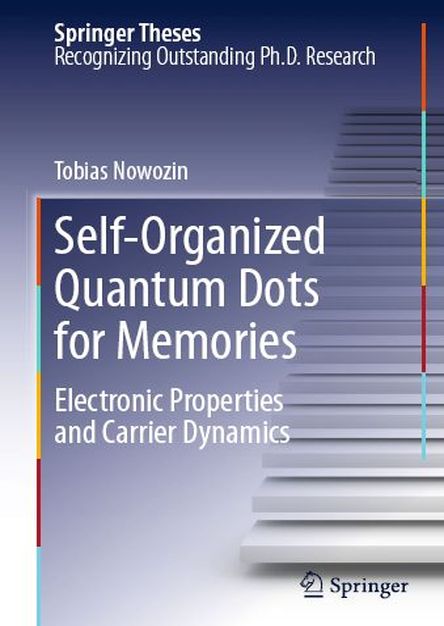 Self-Organized Quantum Dots for Memories: Electronic Properties and Carrier Dynamics by Tobias Nowozin
English | 2013 | ISBN: 3319019694 | 180 pages | PDF | 5 MB
Today’s semiconductor memory market is divided between two types of memory: DRAM and Flash. Each has its own advantages and disadvantages. While DRAM is fast but volatile, Flash is non-volatile but slow. A memory system based on self-organized quantum dots (QDs) as storage node could combine the advantages of modern DRAM and Flash, thus merging the latter’s non-volatility with very fast write times.

This thesis investigates the electronic properties of and carrier dynamics in self-organized quantum dots by means of time-resolved capacitance spectroscopy and time-resolved current measurements. The first aim is to study the localization energy of various QD systems in order to assess the potential of increasing the storage time in QDs to non-volatility. Surprisingly, it is found that the major impact of carrier capture cross-sections of QDs is to influence, and at times counterbalance, carrier storage in addition to the localization energy. The second aim is to study the coupling between a layer of self-organized QDs and a two-dimensional hole gas (2DHG), which is relevant for the read-out process in memory systems. The investigation yields the discovery of the many-particle ground states in the QD ensemble. In addition to its technological relevance, the thesis also offers new insights into the fascinating field of nanostructure physics.
Download
http://www.kingfiles.net/eayv10wq4u7b/3319019694.pdf
http://turbobit.net/agnaw3xo8xen.html