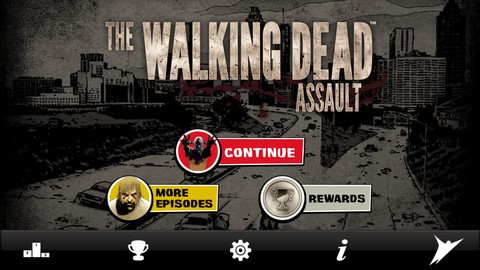 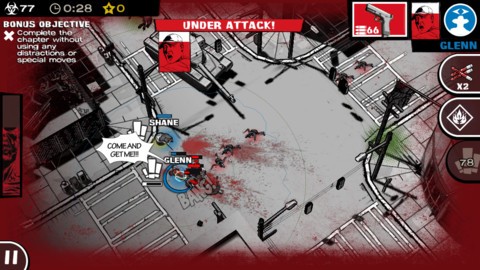 Released for the first time to Google Play fans of Robert Kirkman's award winning "The Walking Dead", this game takes you from the moment Rick awakens in hospital, to the horrific camp invasion that costs the survivors valuable allies and friends.
The Walking Dead: Assault for Google Play features enhancements over the original, top-rated No1 strategy title. These include additional and enhanced sound and visual FX, new balance tweaks to the game's play difficulty, additional booster items to give you more ammo and health, and the Michonne character update from the original release.

AVAILABLE NOW! EPISODE 1: “DAYS GONE BYE”
Play as your favorite characters from the series – Rick, Glenn, Shane, Carl, Andrea, Lori and more! Assemble and choose your ultimate team of four, hunt for supplies, upgrade, and use unique special character abilities to survive against the walker hordes!

CRITICS SAY...
"The Walking Dead: Assault' is a refreshing, complex zombie game"
- Sophie Prell, The Penny Arcade Report
“Assault is a meaty chunk of squad-based survival horror that faithfully follows Rick and the crew through several arcs of Robert Kirkman’s award winning comic book series…Most unexpected and greatly appreciated.”
- Mike Fahey, Kotaku
"Assault is a smart and sometimes fraught blend of running and gunning with the highest production values."
- Rich Stanton, Eurogamer.net
“So far, we're loving every second of our time with The Walking Dead: Assault. If you're into the Walking Dead universe or squad-based strategy games, you can pick this one up with confidence. Now if you'll excuse us, we're going to dive back into the post apocalyptic-world.”
– Chris Reed, Slidetoplay.com
THE PLAYERS SAY...
“This just came out of nowhere and I’m hooked!” –Jbannanyc
“A must buy for The Walking Dead fans.” –Bool Zero
“I love the show and this game does not disappoint.” –im-unarmed
“If you like the comics you will LOVE this game.” -Mstandgshs
FEATURES
•Authentic locations from the award-winning comic series, visualized within a 3D comic book style!
•Play as your favorite characters from the comics with intuitive controls built for Touch-screen devices!
•Trigger distractions such as flares and car alarms to divert attention away from you and your party – but be careful how much noise you make!
•Unlock and upgrade your characters' attributes to tilt the odds in your favor!
•Beat your friends times via Google Play Leaderboards!
•Buy now or Gift this app to a friend!

What's in this version : (Updated : Nov 1, 2013)
Works only on Android devices for 2.3 and up! Minimum req 512MB of RAM!
Major bug fixes for Adreno devices, such as the Xperia series of phones.
Facebook Cloud Save! Login through Facebook to back-up your save and transfer back and forth between your Android devices. Please avoid using multiple Facebook accounts on the same device as we have found this to cause errors. We are working on a fix.

This game has no advertisements